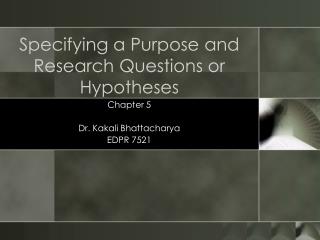 Specifying a Purpose and Research Questions or Hypotheses Specifying a Purpose and Research Questions or Hypotheses

Introduction to Machine Learning - . learning. agent has made observations ( data ) now must make sense of it (

Warm Up - . write three hypotheses that you could research using an observational study in a fast food restaurant. i’m

The Purpose of Action Research - . contributes to the theory &amp; knowledge base to enhance practice supports the