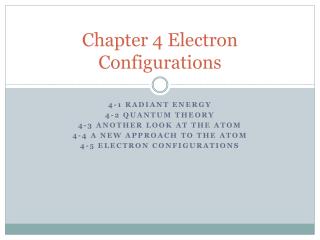 Chapter 5 - . electrons in atoms. greek idea. democritus and leucippus matter is made up of indivisible particles dalton

Chapter 8 - . covalent bonding. let’s review. what do we already know? what is a chemical bond? what is an ionic bond?.

Scanning Electron Microscopy (SEM) - . anders werner bredvei skilbred harald fjeld. outline. what can we use a sem for?