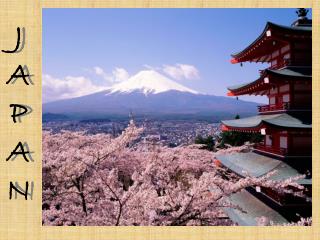 J A P A N. J A P A N. Ancient Japan. First people came from South Pacific, or Siberia, Korea 1,500 years ago agriculture, metalworking widely practiced Until A.D. 300s, Japan had many clans, but Yamato clan rules by 400s by 600, Yamato leaders call themselves emperors of Japan A brief history of Japan - . and comparison with medieval england. all information – unless individually references- is