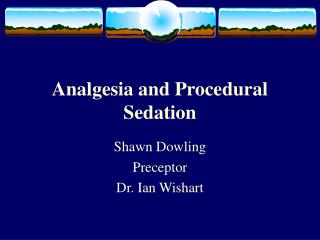 Procedural Sedation and Analgesia in the Emergency Department - . itai shavit, md. 1. unfortunately, this is usually not

Analgesia and Sedation - . pain is a more terrible lord of mankind than even death itself a lbert schweitzer. analgesia

Procedural Sedation - . in the emergency department. objectives. to understand the reason for procedural (conscious)