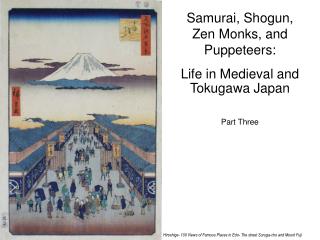 Violence in Japan: Introduction - . the basic structure of the state of japan imperial court: emperors and courtiers

Samurai and Shogun take Over Japan - . by reiner, troy, luc, and ross. the rise of samurai. daimyo- a large land owner.

Ch. 27: Industrialization Outside the West - . japan. the final decades of the shogunate. on the surface, japan

The Rise of Germany and Japan - . a comparison. tokugawa shogunate japan. for almost 300 years the shogunate r uled japan

Medieval Japan - . “the way of the warrior”. japan’s warrior society. feudalism and the samurai like europe, japan

Japan - . samurai armour and family crests. the mon were the crests worn by samurai on their clothing to identify which

Test Review AP World History Ch. 8-10 - . part ii. what is a “shogun”? what was the position of the emperor in

The Japanese Samurai - . a sean viers and bryan cross production. brief background. samurai is defined as the word for a