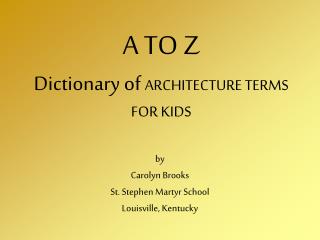 A TO Z Dictionary of ARCHITECTURE TERMS FOR KIDS

A TO Z Dictionary of ARCHITECTURE TERMS FOR KIDS

Healthy Snacks for Kids - . rashel fallon gallia-vinton educational service center. what its all about. how can we get

Words that contain unstressed vowels - . how can we remember the spellings of these tricky words?. abandoned animal

3106 Use of UML 2.0 Diagrams for Systems Architecture Modeling - . gundars osvalds systems of systems architect the