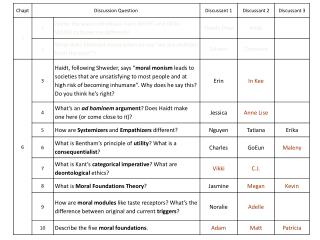 PHIL 1115 LEC 18 THEORIES OF MORALITY part 2 - . some announcements…. web page is up. ursulastange.com (click on my

Law, Liberty and “the Harm Principle” - . &quot;the only purpose for which power can be rightly exercised over

The growing importance of ethics in the ERA: From moral philosophy to integrated ethics - Morality and ethicsreasons of

Chapter One Ethical Theory and Business Practice - 2. objectives. after studying this chapter the student should be able

Morality and the Law - . unit 1. morality. morality refers to people’s values, what they view as right or wrong .

Introduction to Morality - . our moral life in christ chapter 1 overview. morality in the world. morality affects all

My Spelling Words - . ada enenwali. breathless. breathless- speechless out of breath i was very breathless when i won

Fairness vs Welfare - . comments june 25, 2002. basic premise. legal rules should be selected based on their effect on

Achieving Fairness and Equity: How Training Can Be Part of the Solution - . symposium on fairness and equity issues in

Person-Centered Morality - . chapter 7. what is morality’s main concern?. people whose example is morality based on?

Fairness and Relationship Within and between countries - . f airness. - having or exhibiting a disposition that is free