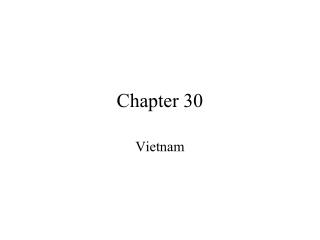 Chapter 30 - . arthropods. i. features of arthropods. a typical arthropod is a segmented , coelomate invertebrate animal

Chapter 30 - . inflation and disinflation. in this chapter you will learn to. 1. describe the response of wages to change

Chapter 30 - . a boy no more. jam. fruit and sugar cooked together to eat with bread to put together tightly ex) traffic

Chapter 30 - . respiratory system. respiration. ventilation : movement of air into and out of lungs external respiration