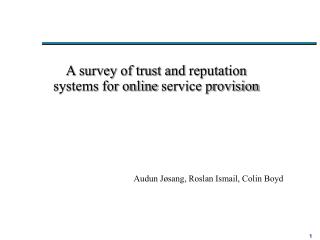 A survey of trust and reputation systems for online service provision A survey of trust and reputation systems for online service provision

The Gwylfa Therapy Service (GTS) - . an evaluation. what is the gts?. specialist service for people with a personality

Introduction to the Common Criteria and the Underlying Concepts of Trust in Computer Systems - . michael mcevilley sigada

Designing Your Survey - . by the end of this lesson you will be able to: define the 6 goals of the questionnaire survey.

Incentives and Reputation - . darwin on reputation. man ‘ s] motive to give aid […] no longer consists of a blind

Banks vs. Nonbanks in US: Disintermediation - . trust services. a trust institution : a legal entity that can hold and

Politeness and Saying Goodbye - . elizabeth coppock. face. to save one's face : also to save face ; to lose face [tr.