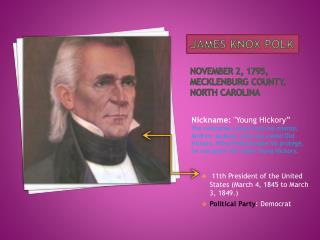 James Knox Polk November 2, 1795, Mecklenburg County, North Carolina. Nickname:  "Young Hickory” The nickname comes from his mentor, Andrew Jackson, who was called Old Hickory. When Polk became his protégé, he was given the name Young Hickory.

Help wanted ad for a president - . by: carrington white. constitutional requirements. natural-born citizens of the united

The Costs of Manifest Destiny Does anyone have a pen? - . what is manifest destiny ?. * a belief that the united states

James Buchanan - . by: drew winton mcbay 4b. born april 23rd, 1791 in cove gap, pa. james buchanan is the only president