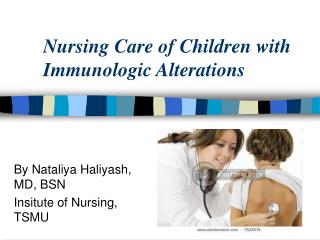 Nursing Care of Children with Immunologic Alterations. By Nataliya Haliyash, MD, BSN Insitute of Nursing, TSMU. Lecture objectives. Upon completion of this chapter you will be able to: Describe the normal functions of the immune system.

NCP Care of the Patient During the Emergent/Resuscitative Phase of Burn Injury - . dr. aidah abu elsoudalkaissi an- najah

Nursing Care of the Child With Cancer - . neoplasia cell growth in cancerous tissue proliferates in disorderly and