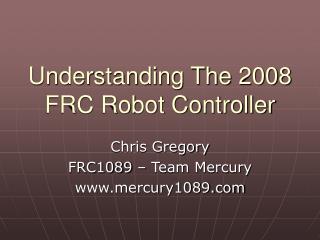 Understanding The 2008 FRC Robot Controller. Chris Gregory FRC1089 – Team Mercury www.mercury1089.com. Agenda. What I will I learn from this workshop? What is the Robot Controller? How do we communicate with it? Robot States (Modes) How does it connect to the rest of your robot?

Jcb robot service manual - The repair strategies illustrated in this manual accentuate the uncommon parts of the item.

An Infographic on How to Choose the Right Roomba Robot - The infographic below is brought to you by roomba robot reviews,

Google Introduces a Self- Driving Robot Car - . by: lisa cramoline october 12, 2010. what kind of car has google been

Chapter 13 Controller Area Network - . history of can (controller area network). it was created in mid-1980s for

Karel J Robot - . a gentle introduction to the art of object oriented programming lesson 2b. primitive instructions and