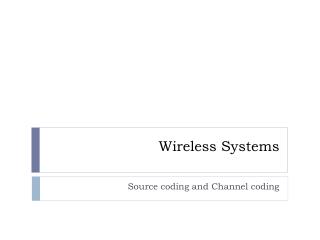 Wireless Systems - . lecture no. 1. introduction. the world is revolutionized by the advancements that have taken place

Wireless Networking and Systems - . cse 590 ns2 tutorial. ns2- network simulator. one of the most popular simulator among

WIRELESS COMMUNICATIONS ELV SYSTEMS - . about us what we do our products and solutions domain expertise projects and