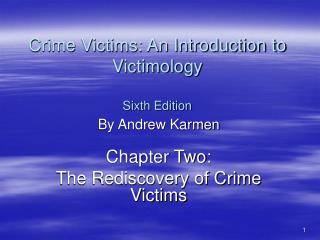 Crime Victims: An Introduction to Victimology Sixth Edition. By Andrew Karmen Chapter Two: The Rediscovery of Crime Victims. History of Victims. In ancient times, criminal justice focused on victims to seek redress for pain and suffering based upon biblical tenets and English Common Law History of the Crime Victim s Rights Movement in the US and the Development of Victimology - Objectives. fear of crime

Fundamentals of Information Systems, Sixth Edition - . chapter 1 part a an introduction to information systems in