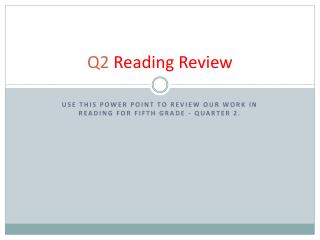 Q2 Reading Review. Use this power point to review our work in reading for fifth Grade - quarter 2. Inference. I can use background knowledge or schema + text evidence to support my comprehension and make inferences. BK + TE = Inference in Comprehension

Review - . coulomb’s law. units of charge. 1 coulomb (c). direction of the electric force is always along the line

Review Text - . by: arno germanndaputra s. an article that presents a critical evaluation of a text, performance, or

The effects of within class grouping on reading achievement: A meta-analytic synthesis - . kelly puzio &amp; glenn

Using Schema to Make Inferences - . essential questions. why is it important to activate my schema before i begin to