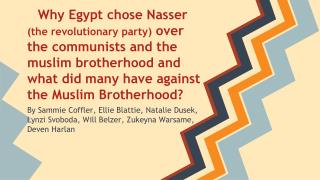 Why Egypt chose Nasser (the revolutionary party) over the communists and the muslim brotherhood and what did many have against the Muslim Brotherhood?. By Sammie Coffler, Ellie Blattie, Natalie Dusek, Lynzi Svoboda, Will Belzer, Zukeyna Warsame, Deven Harlan . Muslim Brotherhood in Egypt.

EZEKIEL CHAPTER THIRTY-TWO - . outline ezekiel chapter thirty-two. the fall of the king of egypt v. 1-6 the greatness of

River Civilizations &amp; Egypt - . nadzak. ?. the development of farming was so awesome it’s considered a

Islam as a political force - . relative importance most significant social organization outside of the family is through