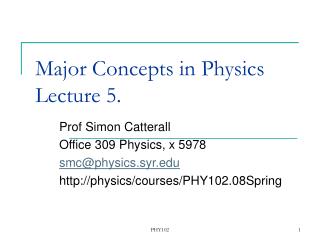 Lectures on B Physics - . bob kowalewski university of victoria currently at la sapienza and the laboratorio nazionale di

Introduction to Physics - . what is physics?.  physics is the study of how things work in terms of matter and energy at

Lecture 2 - . fundamentals of data and signals. objectives. in this lecture, we explore the following telecommunications

Introduction and Mathematical Concepts - . chapter 1. 1.1 the nature of physics. physics has developed out of the efforts