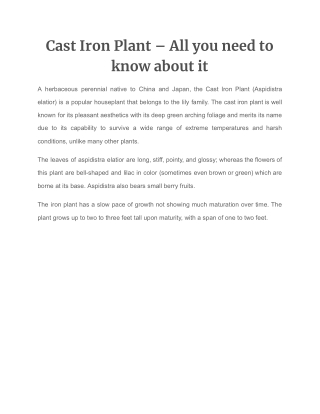 A herbaceous perennial native to China and Japan, the Cast Iron Plant (Aspidistra elatior) is a popular houseplant which belongs to the lily family. The cast iron plant is well known for its pleasant aesthetics with its deep green arching foliage and merits its name due to its capability to survive a wide range of extreme temperatures and harsh conditions. To know more please visit: https://bit.ly/33YFOp6 Cast Iron - Has a wide range of applications and is used extensively in the automotive, power, oil and gas industries,

Cast Iron Chef - . iii. rules all contestants must prepare food on site within the established cooking time of 12-4pm.

Benefits of Cast Iron - What is cast iron and how is it made?. . it is made by remelting raw iron scrap iron and steel

Cast Iron Cookware | Zishta - Zishta.com presents a wide range of the finest cast iron cookware. you can choose from our

Doing Cast Iron Manufacturing Properly - One of the most important industries in the nation is metal casting. cast iron

Victorian Style Cast Iron Radiators - There are several economical ways to keep your house warm and comfortable. you can

Guide For Repairing Cast Iron - Repair your cast iron products with just few tools. we are offering you our cast iron