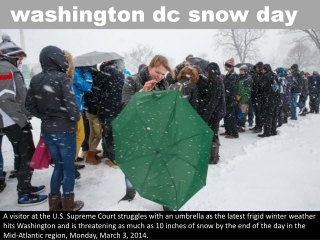 Snow began falling in the nation's capital early Monday, and officials warned people to stay off treacherous, icy roads a scene that has become familiar to residents in the Midwest, East and even Deep South this year. Schools were canceled, bus service was halted in places and federal government workers in the DC area were told to stay home Monday. Snow Day - . frozen flakes, holiday haiku, and winter words. how to properly read poetry. the punctuation in poetry is

SNOW DAY - . by matthew brenner. one winter morning matthew woke up and looked out the window. snow had fallen during the

Snow Day - . by will apperley vi-pjb. silently they slip down fluttering in the breeze laying themselves all over the

Snow Day - . by vanessa taylor. one winter morning vanessa woke up and looked out the window. snow had fallen during the

Snow Day - . by sean may . one winter morning sean woke up and looked out the window. snow had fallen during the night.

Backpage Washington DC - If you are looking for your favorite website backpage in washington. then we have a good news

To Washington DC - 95. us 1. w. s. n. e. to washington dc. to fredericksburg va. to the basic school weapons training