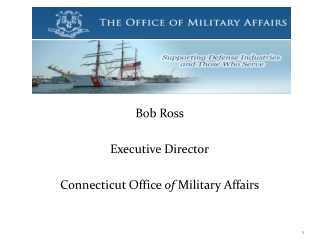 Bob Ross Executive Director Connecticut Office of Military Affairs. Appointed by the Governor Confirmed by the State Legislature Within Department of Economic and Community Development for “Administrative Purposes Only.”

OFFICE OF ASSOCIATE DIRECTOR FOR MILITARY AFFAIRS - . “train like you fight and fight like you train.”. march 2009.

Bob Ross Oil Painting Tips - We hope that these bob ross tips will help you start your journey of art! don’t forget to