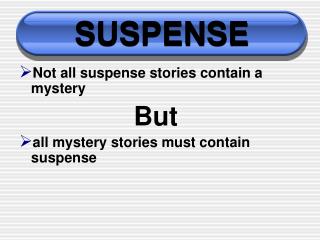 SUSPENSE. Not all suspense stories contain a mystery But all mystery stories must contain suspense. SUSPENSE. Is a feeling of CURIOSITY, ANXIETY or UNCERTAINTY about the outcome of events. SUSPENSE IS CREATED. Through the PLOT

suspense - . by kate stetson. what is suspense?. suspense is a kind of story that makes the reader feel the emotion that

Suspense - . suspense day 1. the case of the spooky sleepover. we waited for the ghost to come. we watched as the

Suspense - . the quality of a literary work that makes the reader or audience uncertain or tense about the outcome of

SUSPENSE - . growing tension and excitement that the reader feels. this is getting really interesting!!!. predict. to

Suspense - . an example of suspense would be from the movie titanic. when the captain is steering away from the iceberg

Suspense - . suspense is the growing interest and excitement readers experience in the rising actions while awaiting a

Suspense/Thriller - . by anissa brown and esbeidy granados. settings. most thrillers have settings in common places such

79. SUSPENSE - . definition – anxiety the reader feels about what is going to happen next in the story. example – in

Warm-Up: Suspense - . how did poe build suspense witihin the audience in tell-tale heart?. writer’s notebooks due

Mystery and Suspense - . by: kayla kassees engl 486. all unquiet things. by: anna jarzab.

MISTERY AND suspense - . dr jekyll and mr. hyde . introduction. dr.jekyll and mr.hyde is a novella writen by robert

Irony and Suspense - . irony. an outcome of events contrary to what was, or might have been, expected. three types of