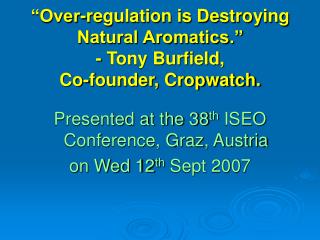 Destroying Avalon - . please spend 5 minutes starting a front page for this unit. you will need to complete this for

Chapter 15 Enzyme Regulation - . outline. what factors influence enzymatic activity? what are the general features of

Natural and Synthetic Polymers - . some natural polymers in food…. gelatin in gummi worms and gummi bears are made from

Nur 4206 Management of patients with renal/urinary disorders - . by linda self. functions of the kidney. regulation of

Labelling of Detergents according to Regulation (EC) 648/2004: Overview of Main Requirements and Practical Examples