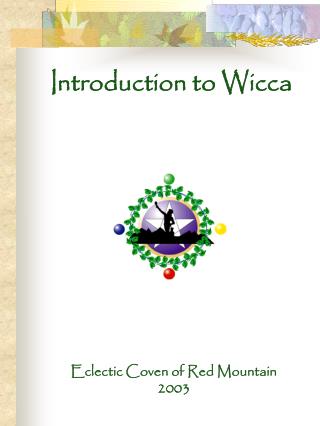 Wicca - . by: jennifer rubio, monica thorpe, and bobby izydore. how many??. i t is not known for sure it is estimated to

Wicca - . by brooke student. wicca is a peaceful, earth-honouring, polytheistic religion that has no connection

Wicca - . the misunderstood religion. some common misconceptions. witchcraft and new age wicca are the same thing. it is

Wicca - . a neo-pagan religion by: chris mason . origins of wicca . wicca is said to have originated from england in the

WICCA - . a neo-pagan, earth centered religion. by katie student. the meaning of wicca

Session 2 - Wicca - . the religion of wicca is one of the fastest growing religions in america. in 2008 there were

What is Wicca?? - . wicca is a pagan religion wicca (and pagans) honor: the elements of nature : earth, air, fire and