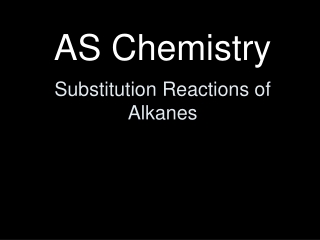 Reactions of Alkanes - . ib. combustion of alkanes. alkanes are unreactive as a family because of the strong c–c and

Substitution Reactions of Alcohols - . we have looked at substitution reactions that take place via two mechanisms: s n 1

Substitution reactions of benzene - . l.o.: outline the mechanism for mononitration and monohalogenation of benzene.

Properties and reactions of Alkanes - . alkanes are saturated hydrocarbons. this means they contain only carbon and

AROMATIC SUBSTITUTION REACTIONS - . nomenclature. learn nomeclature either on your own or use the organic nomeclature

Electrophilic Substitution Reactions - . the nitration of

AROMATIC SUBSTITUTION REACTIONS - . 36 kcal/mol resonance. “double” bonds in a benzene ring do not react like those

Chemical Reactions of Alkanes and Alkenes - . 1. structure cyclohexane cyclohexene. or. or. table: 2-7. question 1 - 5.