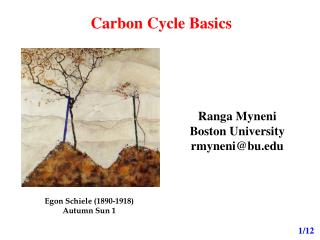 Nutrient Cycles - . aka: biogeochemical cycles. living things require both a source of energy and a source of matter in

Analysis of the terrestrial carbon cycle through data assimilation and remote sensing - . mathew williams, university of

Carbon: Hero and Villain - . 8 th grade physical science: chemistry • 6a. students know that carbon, because of its

THE CALVIN CYCLE - . or light independent reaction or dark reaction. what is the calvin cycle?. it is the 2 nd phase of

Carbon Dioxide in the Atmosphere - . co 2 is emitted in the atmosphere in many ways naturally  carbon cycle, volcanic

Calvin Cycle - . the calvin cycle makes sugar from the atoms in co 2 plus the h+ ions and electrons carried by nadph. the

Biogeochemical Cycles - . biogeochemical cycles. there are 94 elements that are naturally occurring most of them find

Ecology Basics - . what is ecology?. ecology:  a branch of science concerned with the interrelationship of organisms and