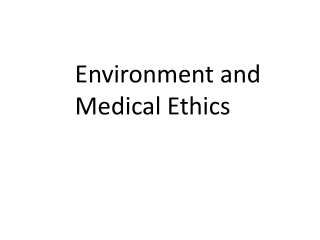 Environment and Medical Ethics. Keywords. Global Warming – the increase in the temperature of the Earth’s atmosphere (thought to be caused by the greenhouse effect) Natural Resources – naturally occurring materials, such as oil and fertile land, which can be used by humans

Ethics and Environment - The pistoleros presents. ethics and environment. british money in the asia pulp and paper.

Medical Ethics - . advancement in medicine creates new problems. medical ethics. how will the recipient of an organ be

Medical Ethics - . learning objectives:-  to understand the nature of medical ethics in terms of both beginning life and

Medical ethics - . introduction to basic principles. ethics are not …. ethics is not the same as feelings ethics is

Medical Ethics - . introduction. the origins of the field and its current status. the beginnings: a) the nuremburg code,

Medical Ethics - Preface. for the health care provider, deciding the right thing to do is often a split second event;