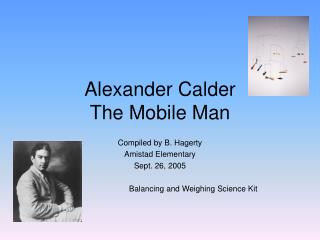 Alexander Calder - . “above all else, art should be fun…”. alexander calder american artist. artist and engineer

Alexander Hamilton (1755~1804) - . one of the boldest american political thinkers of his time. hamilton developed the

Alexander Calder - . printmaking. alexander calder printmaking. back in november we learned a little about the artist,

CONTOUR WIRE PORTRAIT - . visual arts standards :. 2.1 solve a visual arts problem that involves the effective use of the