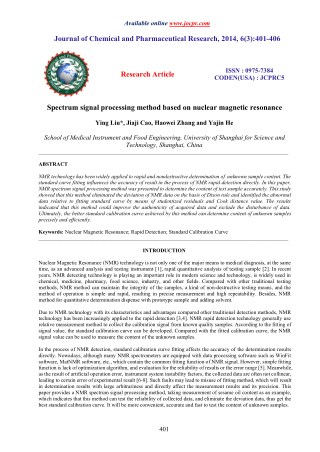 NMR technology has been widely applied to rapid and nondestructive determination of unknown sample content. The
standard curve fitting influences the accuracy of result in the process of NMR rapid detection directly. In this paper,
NMR spectrum signal processing method was presented to determine the content of test sample accurately. This study
showed that this method eliminated the deviation of NMR data on the basis of Dixon rule and identified the abnormal
data relative to fitting standard curve by means of studentized residuals and Cook distance value. The results
indicated that this method could improve the authenticity of acquired data and exclude the disturbance of data. Ultimately, the better standard calibration curve achieved by this method can determine content of unknown samples
precisely and efficiently. NUCLEAR MAGNETIC RESONANCE - . nuclear magnetic resonance (nmr) is the spectroscopic study of the magnetic properties of