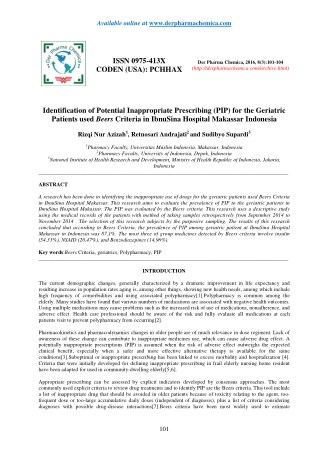 A research has been done to identifying the inappropriate use of drugs for the geriatric patients used Beers Criteria
in IbnuSina Hospital Makassar. This research aims to evaluate the prevalence of PIP to the geriatric patients in
IbnuSina Hospital Makassar. The PIP was evaluated by the Beers criteria. This research uses a descriptive study
using the medical records of the patients with method of taking samples retrospectively from September 2014 to
November 2014 . The selection of this research subjects by the purposive sampling. The results of this research
concluded that according to Beers Criteria, the prevalence of PIP among geriatric patient at IbnuSina Hospital
Makassar in Indonesia was 87,1%. The most three of group medicines detected by Beers criteria involve insulin
(54,33%), NSAID (20,47%), and Benzodiazepines (14,96%).