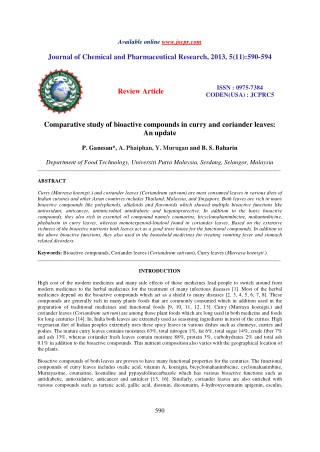 Comparative study of bioactive compounds in curry and coriander leaves: An update Curry (Murraya koenigii.) and coriander leaves (Coriandrum sativum) are most consumed leaves in various diets of
Indian cuisines and other Asian countries includes Thailand, Malaysia, and Singapore. Both leaves are rich in many
bioactive compounds like polyphenols, alkaloids and flavonoids which showed multiple bioactive functions like
antioxidant, anticancer, antimicrobial antidiabetic and hepatoprotective. In addition to the basic bioactive
compounds, they also rich in essential oil compound namely coumarine, bicyclomahanimbicine, mahanimbicine,
phebalosin in curry leaves, whereas monoterpenoid-linalool found in coriander leaves. Based on the extensive
richness of the bioactive nutrients both leaves act as a good store house for the functional compounds. In addition to
the above bioactive functions, they also used in the household medicines for treating vomiting fever and stomach
related disorders.

Comparative study of bioactive compounds in curry and coriander leaves: An update

Carbon Compounds - Organic chemistry is the study of all compounds that contain bounds between carbon atoms. why study

Curry Powder - . by danny d’amico. what curry powder is made from. 1 teaspoon black peppercorns 1 teaspoon mustard

CARBON COMPOUNDS - . organic compounds. the compounds of carbon( except the oxides of carbon, carbonates, hydrogen

The Effect of Fertilizer on The Growth Of Coriander - . hypothesis and purpose. hypothesis: if tested, then miracle-gro

Final Project (Photo Essay) Curry Vs. Wizards - . pregame band show firing up the tip off in washington, golden state the

Lecture 3a - . extraction of caffeine from tea leaves. caffeine - history. caffeine is a naturally occurring alkaloid