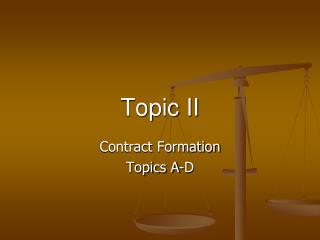 Topic II. Contract Formation Topics A-D. Requisites for Contract Formation. [A] contract requires a bargain in which there is a manifestation of mutual assent to the exchange and a consideration . R2 § 17(1). Manifesting Mutual Assent.

Topic Sentence II - . riddles. it is greater than god and more evil than the devil. the poor have it, the rich need it

Lengua Inglesa II Topic 5 - . mood and modality. mood. in week 1 of this course, we introduced the notion that each

Topic 8: Part II - Properties of Solutions - . solutions. are homogeneous mixtures that can occur in all phases –