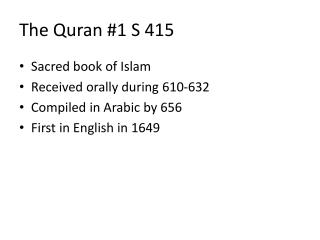 The Quran - . most of usul on &quot;kitabullah&quot; (i.e., quran) such discussion includes classification

The Quran - . most of usul on &quot;kitabullah&quot; (i.e., quran) such discussion includes classification of

The Holy Quran - . the holy quran is the primary source containing all the fundamental directives and instructions of

Chapter 3 The First Source of Shariah : The Quran ( Continue ) - . contents of the lesson. characteristics of quranic

Did prophet M uhammed ( s.a.v .) write the quran ? - . who authored the quran?  someone must have produced it!  after

How to Memorize the Quran - If you wish to learn reciting quran properly, study tajweed with professional imam, or to

Importance and Benefits of Quran in Islam - . introduction. challenge of quran benefits of reading quran first verses of

Jesus and Mary in the Quran - . laying the groundwork. john the baptist ( yahya ): a prophet, “chaste,” “confirming

Scientific Miracles in the QURAN - . doaa abdelrahman. the description of knowledge in the quran. there are plenty of

Taking Quran to every home - . the prophet muhammad observed: “there will be no home remaining – big or small – in