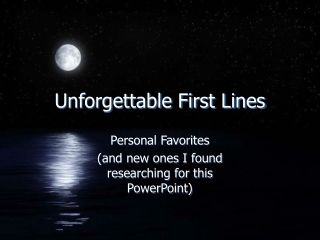 Unforgettable First Lines. Personal Favorites (and new ones I found researching for this PowerPoint). You can't judge a book by its cover, but librarian Nancy Pearl thinks the first line can tell you a lot.

Unforgettable First Lines - . personal favorites (and new ones i found researching for this powerpoint). you can't judge

Fabulous First Lines - . for persuasive writing. 1. get a piece of blank paper from the top of the computer cart. 2. fold

Great First Lines - First lines of a novel.. the first line sets the scene, the tone, sheds just enough light on the

Unforgettable films - . unit four. task one :. revise. 1. talk about the sound of music according to the table. naughty.

Unforgettable Teachers - . unit four. objectives. grasp the main idea and structure of the text; learn to develop an

Narrating Unforgettable Moments - . sharing personal and amusing stories is one way people connect with each other. the

Narrating Unforgettable Moments - . unit 18 asl iii. basic role shift sequence. tell where you and the other person are

Lines, lines , and More Lines! - . by: ms. rozelle 8 th grade math. intersecting vs perpendicular. are they the same??

An Unforgettable Beach Vacation - Vacation is a word that makes us relaxed and happy whenever we hear it. the reason is

Making Wedding Photos unforgettable - Is usually dream of every couple. wedding events are considered one of the best