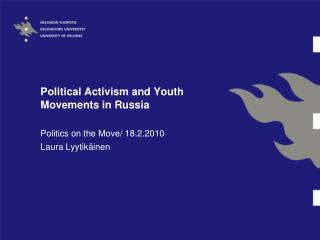 Political parties and youth movements - . new winds started to blow in hrubieszow at the beginning of the 20 th

MUSIC IN POLITICAL AND SOCIAL MOVEMENTS - . protest songs experiencing music 2200. what will you learn?. what protest

Political System in Russia - . by: josh and alex. current political system. there is a president who works with the duma

Political Change: Revolutionary Movements - . 15 the french revolution. what you will learn at the end of this chapter