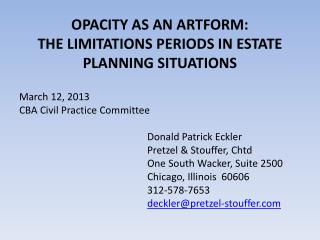 OPACITY AS AN ARTFORM: THE LIMITATIONS PERIODS IN ESTATE PLANNING SITUATIONS

OPACITY AS AN ARTFORM: THE LIMITATIONS PERIODS IN ESTATE PLANNING SITUATIONS

Farm Estate Planning Strategies - . one of the challenges of planning is to make people aware that they need to take

Retirement Planning - . who should be the beneficiary of your ira?. lewis w. dymond, jr. wealthcounsel, llc. retirement

Ergonomics - . a science that focuses on human capabilities and limitations in the design of work tasks,workstations,