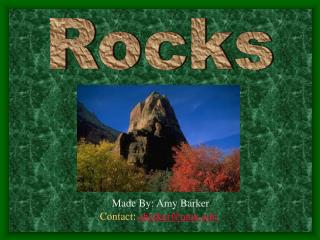 Contact: abarker@nmu.edu. Rocks. Made By: Amy Barker. Rocks. In this lesson you will learn about the rock cycle and what some kinds of rocks there are on Earth. First thing we will begin with is identifying the three main different kinds of rocks.

weather - . by: jimmy burgard. what is evaporation?. evaporation is the process by which water changes from a liquid to a

A+ny where 4.0 Teacher Training - . what is needed to build a school using a+?. access the log on screen using the url

Year 7-10 E-Learning in Languages (ELL) Teacher Reports - . does the use of video as a reflective tool for teachers and

First Days of School - . why does the first day of school make us feel nervous and excited? as a new teacher, what are

Teacher Self-Efficacy - . what elements constitute teacher self-efficacy, and what factors are associated with differing