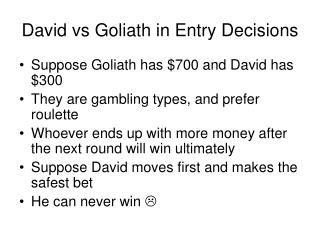 David vs Goliath in Entry Decisions

David vs Goliath in Entry Decisions. Suppose Goliath has $700 and David has $300 They are gambling types, and prefer roulette Whoever ends up with more money after the next round will win ultimately Suppose David moves first and makes the safest bet He can never win .

David vs Goliath in Entry Decisions

Distributed Computing without Surprises - . denis a nicole 30 th november 2005. the sony rootkit. it’s too easy to 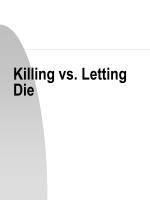 Killing vs. Letting Die - . james rachels’ arguments against the distinction. if withholding lifesaving aid is ok in

Effective C++ - . 55 specific ways to improve your programs and designs. why???. “used without discipline, however, c++

What Is Oligopoly? - . oligopoly is a market structure in which natural or legal barriers prevent the entry of new firms.

TOUGH DECISIONS - . tough decisions this is a lesson that helps to bring to our mind just how uncompromising the religion