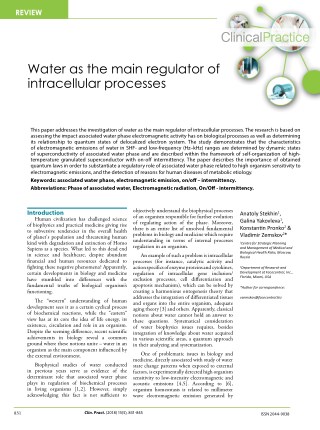 Water as the main regulator of intracellular processes

This paper addresses the investigation of water as the main regulator of intracellular processes. The research is based on
assessing the impact associated water phase electromagnetic activity has on biological processes as well as determining
its relationship to quantum states of delocalized electron system. The study demonstrates that the characteristics
of electromagnetic emissions of water in SHF- and low-frequency (Hzâ€“kHz) ranges are determined by dynamic states
of superconductivity of associated water phase and are described within the framework of self-organization of hightemperature granulated superconductor with on-off intermittency.

Water as the main regulator of intracellular processes

SECRETION OF INDIVIDUAL STEROID HORMONES IS RESTRICTED TO SPECIFIC REGIONS OF THE ADRENAL CORTEX - Glomerulosa. capsule.

Bacterial Chemotaxis - . we will discuss the strategies of how bacteria swim towards food: o how do they detect the food

Chapter 45 - . hormones and the endocrine system. figure 45.1 an anise swallowtail butterfly emerging from its

Synapses - . a connection that mediates information transfer from one neuron: to another neuron to an effector cell

Composed of glands that secrete hormones into the circulatory system . Hormones are secreted in minute amounts into