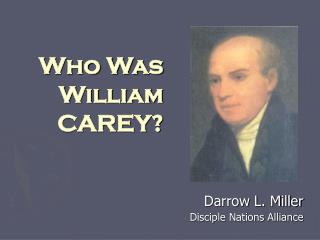 Who Was William CAREY?. Darrow L. Miller Disciple Nations Alliance. “William Carey was a Christian missionary,” answers a science student . “And he was also the botanist after whom Careya herbacea is named. It is one of the three varieties of eucalyptus, found only in India.”

Who Was William CAREY - ?william carey was a christian missionary," answers a science student. ?and he was also the

Who Was William Wordsworth? - &quot;i wandered lonely as a cloud that floats on high o'er vales and hills, when all

Who was Joshua? - . seriously, why does he get his own book in the bible? . joshua . one of the scouts sent into the

Who Was Stalin??? - . joseh besarionis jughasvili. born 18 december 1878 in gori, georgia (not georgia as in usa) scared

Who was Jesus? - . jesus’ self identity. nt reliability. radical critics get a free pass from the press scholarship has

Who was Jesus? - Synoptic gospel groups. who was jesus?. gospel of mark. primary audience: early christians who were

Who Was He ?? - . no one knows exactly who he is, where he lived, who his family were, what he worked as or any other

Who was Merlin? - . by :isaac garner. who was merlin? . merlin was a wizard and celtic priest who helped king arthur in

Who was Involved - . us military 10 th marines. the battle of nasiriya. presented by: a. lott p. hilleary h. preston b.

Who was Hilidanus - . a. adegbesan,. case 1. 68 year old lady admitted with a 2 day history of diffuse abdominal pain and

Who was Picasso? - This interactive powerpoint will introduce some of the most influential spanish painters of all time.