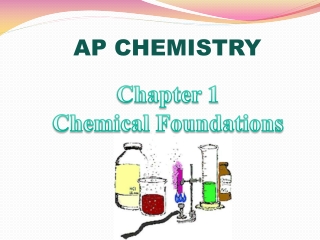 AP CHEMISTRY. Chapter 1 Chemical Foundations. Review. Scientific method SI system -know prefixes in blue on pg 9 Mass vs weight-an object’s mass reflects the amount of matter it contains. An object’s weight is the pull of gravity on that matter. Uncertainty.

AP Chemistry - . tips for success: do the homework. i deleted all the fluff. read and understand the notes. read the

AP Chemistry - . introduction. this course is designed to be the equivalent of a first year college chemistry course

AP Chemistry - . general labs that should be completed for the ap. 1. determination of the formula of a compound.

AP Chemistry - . chapter 2b mr. solsman. types of formulas: 1. empirical—shows the relative number of atoms of each