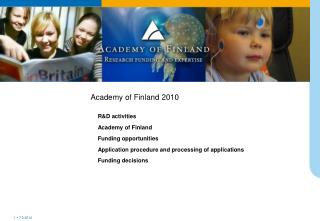 Academy of Finland and Asian – Finnish Research Cooperation - . academy of finland as a facilitator for joint projects.

Finland - . where in the world? . finland is part of northern europe. nestled between sweden and russia. although it is

Finland - . land and climate. http://www.penttila-gardens.com/route/location/04.htm. finland's winter normally are below

Finland - . by krisztina pintye. finland  is situate d in the  region of  northern europe it is bordered by  sweden