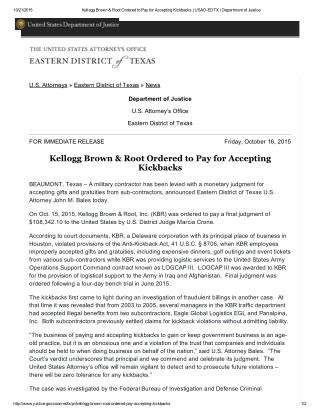 KBR, a Delaware corporation with its principal place of business in Houston, violated provisions of the Anti-Kickback Act, 41 U.S.C. § 8706, when KBR employees improperly accepted gifts and gratuities, including expensive dinners, golf outings and event tickets from various sub-contractors while KBR was providing logistic services to the United States Army Operations Support Command contract known as LOGCAP III. LOGCAP III was awarded to KBR for the provision of logistical support to the Army in Iraq and Afghanistan. Final judgment was ordered following a four-day bench trial in June 2015.

A set of different elements that behave coherently and a whole zoo of isotopes - . not useful for earth history. some

Build a better blog - Your blog is your authority-building home base. discover 17 awesome tips from the pro's to turn