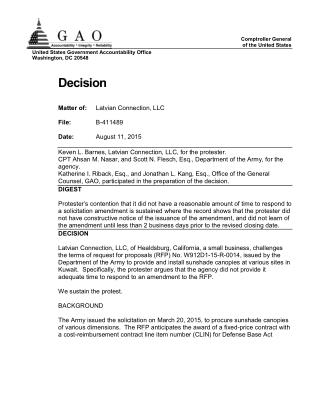 Another win for Latvian Connection LLC and all other small businesses being discriminated by the US Army. The protest was filed for not notifying all interested bidders of the amendment made to a
solicitation. The Army posted the amendment on AFSI and not Fedbizops. AFSI is not the government-wide point of entry designation for publication of solicitations. Thus, this will sunset on 15 October 2015. Latvian seacoast - . seacoast. seacoast is a part of the mainland; coastline is the outline when seen from the sea or

Enquiry about the Comenius project (Latvian students) - . how well do you think your team was working?. how big were your

The Association of Latvian Chemical and Pharmaceutical Industry - . lakifa membership in the latvian and international

Latvian Folk Dress - . latvian folk dress. folk dress in latvia has been and still is an important symbolic role of

LATVIAN RED CROSS YOUTH - . we’re so different, but we are united by the same aim!. who are we?. the latvian red cross

“ Situation in Latvian agricultural cooperation today ” - Indulis jansons chairman of the board , latvian

Latvian Folk Dress - . latvian folk dress. folk dress in latvia has been and still is an important symbolic role of