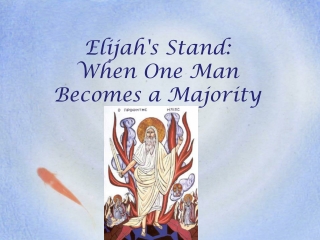 Elijah's Stand: When One Man Becomes a Majority

Elijah's Stand: When One Man Becomes a Majority. History. King Ahab, King of Israel Most evil king “Ahab did more to provoke the LORD God of Israel to anger than all the kings of Israel who were before him” (1 Ki 16:33) Tries to eradicate the worship of God in Israel

Elijah's Stand: When One Man Becomes a Majority

Jesus Christ King of Kings and Lord of Lords - . 1 timothy 1:17 now unto the king eternal, immortal, invisible, the only

2 Kings 2:1-9 - When the lord was about to take elijah up to heaven in a whirlwind, elijah and elisha were on their way

An Overview of 2 Kings - From elijah to exile . an overview of 2 kings. prepared for the church of christ in champions.