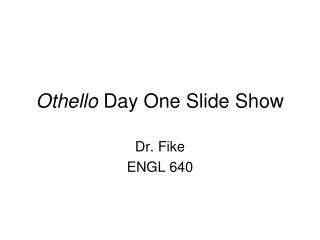 Othello Day One Slide Show. Dr. Fike ENGL 640. Outline. This presentation has two parts: Surface vs. depth or appearance vs. reality with respect to characters and geography Moors. Part One: Appearance vs. Reality.

OTHELLO - . by william shakespeare. iago. intelligent cunning capable of tempting and controlling characters around him

Othello Day 7 - . english 12. desdemona’s prop. pick a card as you come in and match it to the cards at the desks. this

OTHELLO - . year 13 english with mrs kelly. the play (some more general notes). tragedy of a man who kills the person he

Othello - . i kissed thee ere i killed thee, no way but this, killing myself, to die upon a kiss. othello, act v, scene

OTHELLO – ESSAY assessment task #2 - . how to prepare? where to start? what process should you follow?. …what does it

Introduction to Shakespeare’s Othello - . then must you speak of one that loved not wisely, but too well…. william