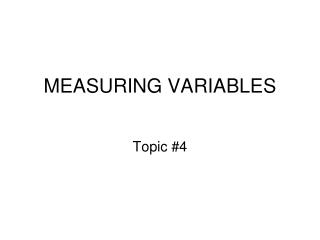 MEASURING VARIABLES. Topic #4. Empirical Research Propositions / Expectations / Hypotheses. Consider propositions #1 and #16 in Problem Set #3A, which we can state more formally as follows:

Defining and Measuring Variables - . slides prepared by alison l. o’malley. passer chapter 4. think of something that

Defining and Measuring Variables - . chapter 3 dusana rybarova psyc 290b may 17 2006. outline:. an overview of

Part II: Measuring Psychological Variables - . in the last section, we discussed reasons why scientific approaches to

Measuring abstract concepts: Latent Variables and Factor Analysis - . correlation as the shape of an ellipse of plotted

Variables - . have a type have an address (in memory) have a value have a name (for now). variables - name. must start

VARIABLES - . topic #3. variables and the unit of analysis. variables are characteristics of the “things” that we are

Variables - . mr. mctavish. one address – one piece of information. boolean – true/false. how to declare. bool

Variables - . variables start with a $ sign when used . the variable gets no $ when declared . declare a variable with

Variables - Review of terms. sample / individual: the objects described by a set of data, individuals may be people,

VARIABLES - . warm-up. choose a topic below and write a testable question and hypothesis regarding the topic. mobile

VARIABLES - . and other things related to methodology. variables . a variable is a trait that differs from one case to