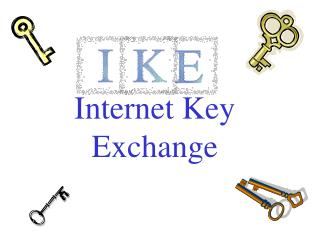 Diffie-Hellman Key-Exchange Algorithm - . alice and bob agree on a large prime, n and g, such that g is primitive mod n.

IPSec - . ipsec provides the capability to secure communications across a lan, across private and public wide area

IPSEC VPN - . what is a vpn?. vpn is a tunnel data is encrypted and then encapsulated by a vpn gateway vpn protects the

IPsec: IKE, Internet Key Exchange - . ipsec does not use public key infrastructure and exchanging keys before an ipsec