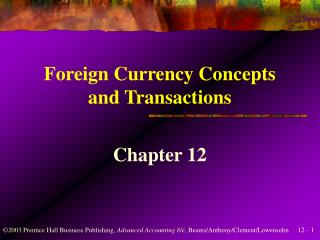 Foreign Currency Concepts and Transactions. Chapter 12. Learning Objective 1. Introduce foreign currency and definitions. Foreign Exchange Concepts and Definitions. Currencies provide…. a standard of value,. a medium of exchange,. and a unit of measure. for economic transactions.

Chapter 2 The Market for Foreign Exchange - . lecture 2a. the foreign exchange market. exchange rate the value of one

Foreign Exchange - . exchange rate is the price of a currency in terms of a foreign currency. foreign exchange. the

FOREIGN CURRENCY FUTURES - First, we review some aspects of the currencies cash markets with emphasis on the: interest

Lecture 5 - . understanding exchange rates (1). what is an “exchange rate”?. the price of one currency in terms of

FX Concepts - . foreign exchange (fx). conversion of one currency into another eg eur into usd. what is fx/forex?.

TRANSLATION OF FOREIGN CURRENCY FINANCIAL STATEMENTS - . when a u.s. company prepares its financial statements, it must