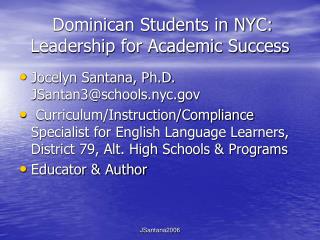 PATHWAYS TO SUCCESS - . apex (academic program for the exceptional). a special education service designed for students in

If You MAP Academic success, They Will Follow - . helping students navigate and stay on course to reach their

LEADERSHIP The key to Success - . spring workshops, 2012. what is leadership?. leadership is influence starts with

Standard VI: Teachers contribute to the academic success of students - . the work of the teacher results in acceptable,

Dominican Republic - . dominican republic. occupies the eastern 2/3 of the island of hispaniola. it is the size of the

Developing Academic Leadership Capability 1 - . learning outcomes. be able to explain the general principles of the

The Write Approach to Academic Success for NSU Students 2012: The Basics - . ” what is written without effort is, in