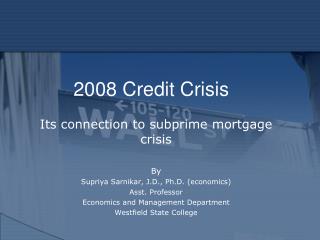 2008 Credit Crisis. Its connection to subprime mortgage crisis By Supriya Sarnikar, J.D., Ph.D. (economics) Asst. Professor Economics and Management Department Westfield State College. The Beginnings of the Crisis. You have heard that the current credit crisis began in the housing market.

«The global financial crisis: its effects and anti-crisis programs of Kazakhstan» - . embassy of the republic of

What Caused the Financial Crisis of 2008? A Story of Adverse Incentives - . february 24, 2012 teaching financial crises

The Credit Crisis of 2008 “You Fail, We Bail?” Southwest Chapter PLUS Educational Seminar - . seán mooney, chief

Financial crisis - . what exactly is it? subprime crisis (also known as the mortgage or housing crisis) bail outs

Everything you wanted to know about the financial crisis but were afraid to ask - . 16 october 2008 shawn donnelly (ud,

The Global Financial Crisis of 2008 and Its Implications for India - . can india match china?. by dr. surendra k. kaushik

An Overview of the 2008 Financial Crisis - . (the perspective of an electrical engineer on wall street). samir padalkar

Impact of Financial Crisis on Indian Banking and Strategies in dealing with the Crisis - . india china financial